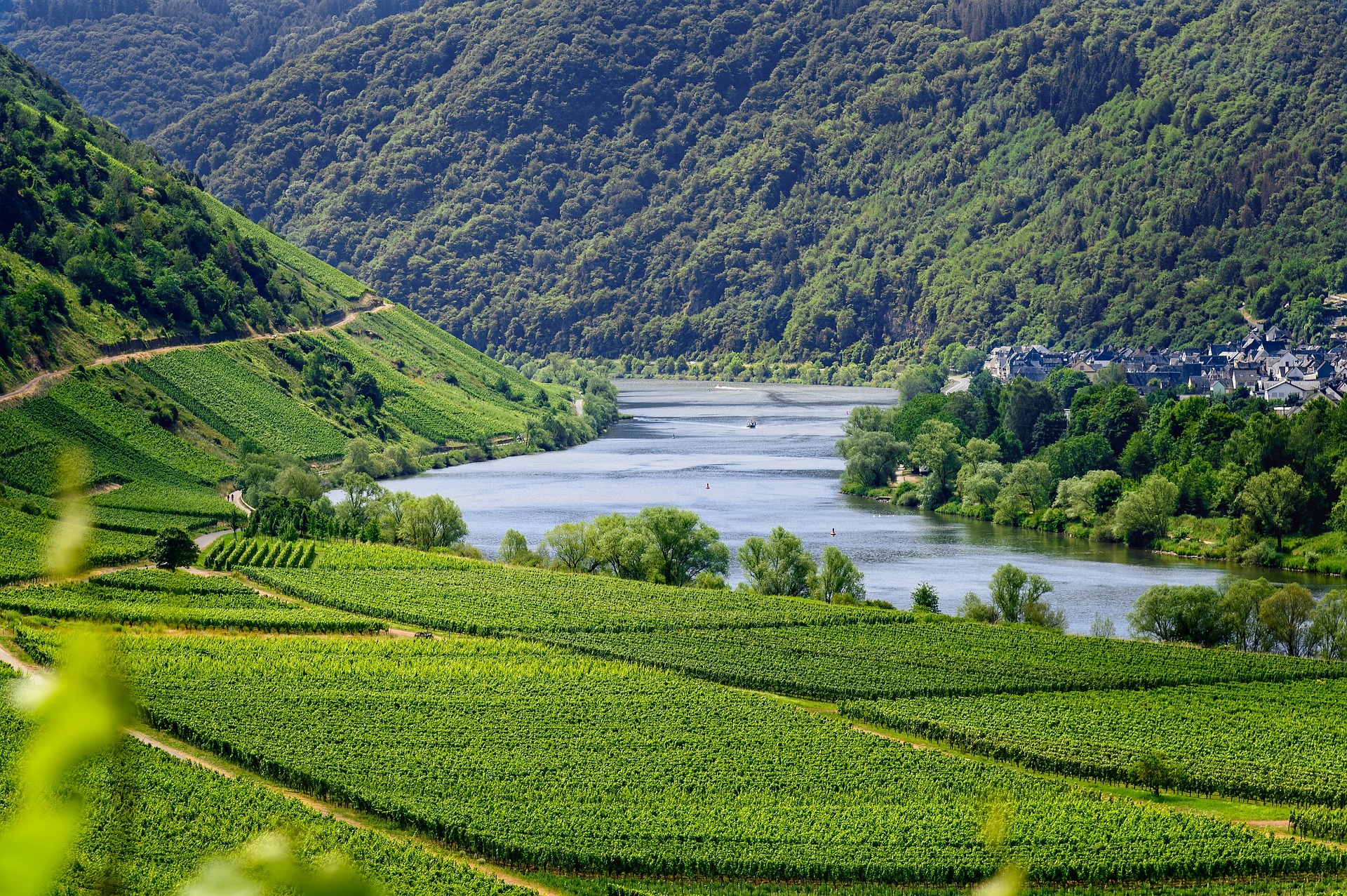 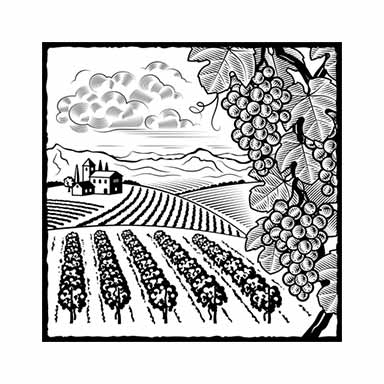 The southern Moselle from Schengen to Trier

The southern Moselle wine-growing region is part of the Moselle wine-growing area and meanders from Schengen to the mouth of the Saar near Trier, uniting the countries of France, Luxembourg and Germany in its Moselle loops and wide valleys. The tributary Sauer with its unique landscape is also part of the wine region. In terms of landscape, the Upper Moselle and the Moselle Gate form a unified region, the "Southern Wine Moselle".

An international river and wine region

As a border river, the Moselle stretches from Schengen to the mouth of the Saar near Trier and unites the countries of France, Luxembourg and Germany in its Moselle loops and wide valleys. The Moselle in the southwest of the Moselle region has a special geological, scenic and viticultural character. Here the valley is wider and the slopes are less steep than in the rest of the river.
Well-known wine communities here are Perl, Schengen, Nittel, Machtum, Ahn, Remich, Wormeldange, Palzem, Grevenmacher and many more. 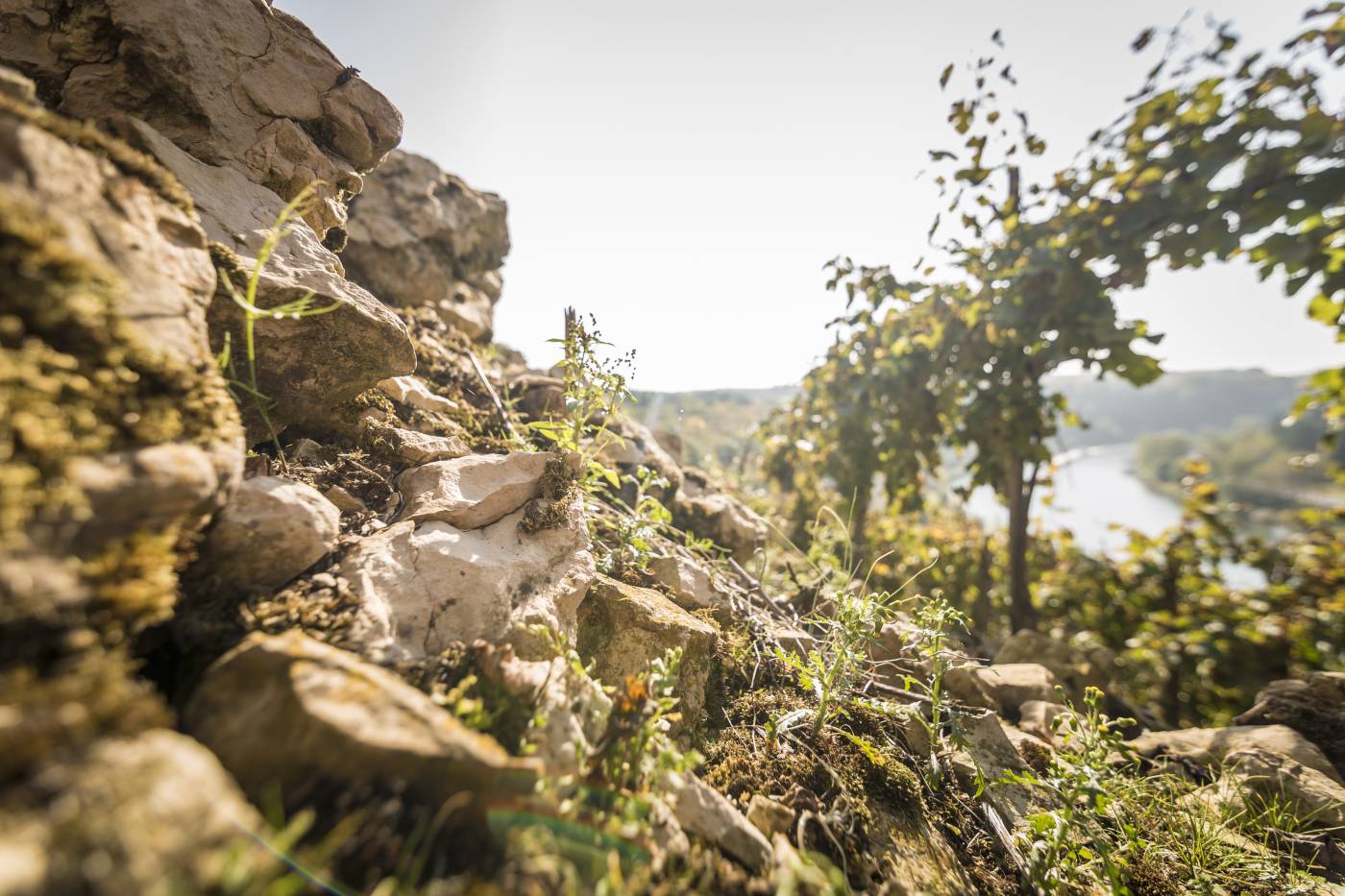 Elbling and Pinot wines on the Upper Moselle

The southern Wein-Mosel is geologically part of the Paris Basin. Around 240 million years ago, there was a shallow shell limestone sea there. Dolomite beds were formed from the shell-rich deposits and the limestone-rich clay, silt or silt and sand carried into the sea by rivers. Shell limestone and marl mixed to form today's soils.

Dolomite rocks characterise the face of the southern Moselle wine region in many places.

Grape varieties of the southern Moselle

Burgundy varieties, which thrive well on the calcareous soils, have become very important. Pinot Blanc, Pinot Girs, Auxerrois and Pinot Noir, or Pinot Noir Blanc de Noir, together account for more than 20 percent of our vineyard area.
The soils of the Moselle valley south of Trier are characterised by dolomite stone and marl of the shell limestone and Keuper. In addition to the Burgundy and Rivaner varieties listed above, the Upper Moselle, also called the Southern Moselle, is mainly cultivated with the old grape variety Elbling - more than 60 percent of our vineyard area.

The wines of the southern Moselle

Depending on the composition of the vineyard soil and the water supply, the wines are characterised differently. The wines from soils with a high proportion of marl, such as the Palzemer Carlsfelsen, show themselves creamy, charming with balanced acidity and restrained soil tone. The aromas of the different grape varieties are delicate and restrained. The Burgundies are delicately nutty with hints of almond, pear, quince and herbs.

Elbling of the southern Moselle - the local hero

The Elbling, which predominates here, also shows notes of cider pears, herbs and a pleasant mineral character. The wines are slender on the palate, showing floral nuances and again pear, quince and a stimulating minerality.

The wines are best enjoyed young, but can age for up to three years. The wines go quite well with a domestic to rural regional cuisine.

The vineyards of Upper Moselle 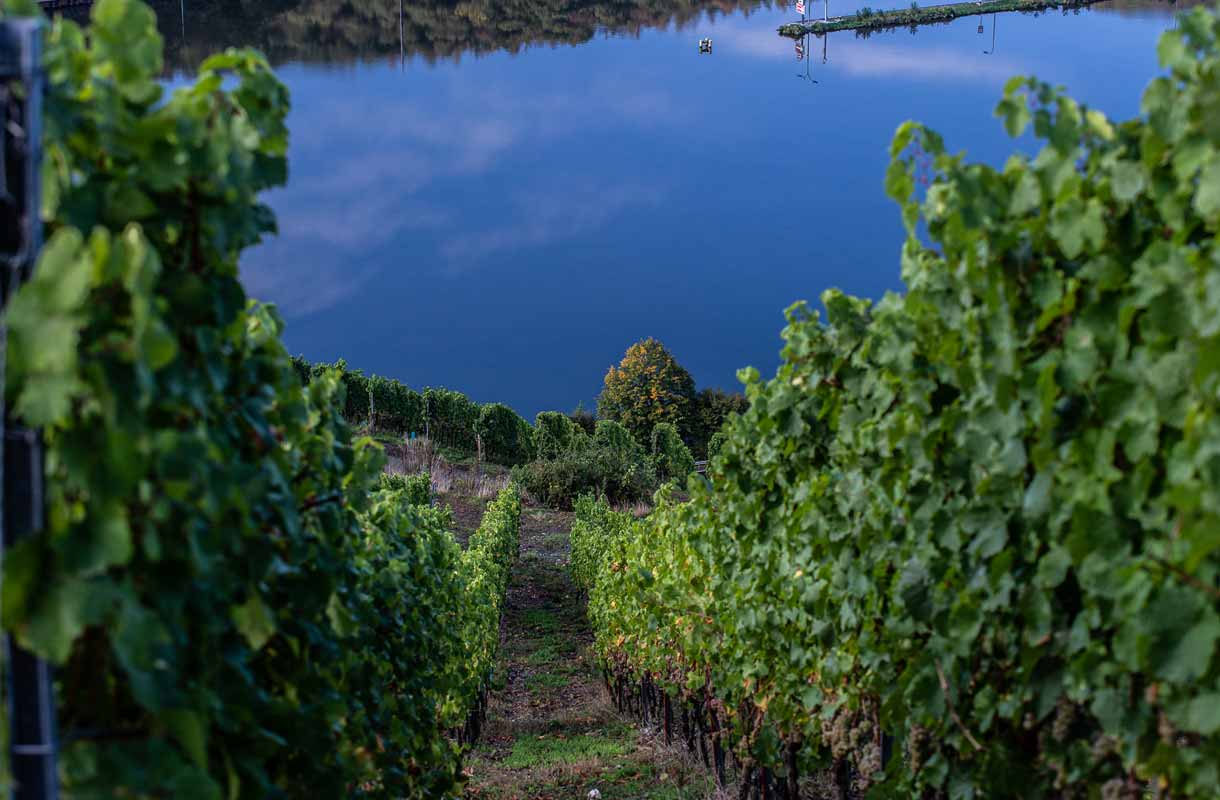 The Terroir of the Moselle in Luxembourg

There are also has some vineyards on the lower Sauer river. Luxembourg's vineyards are mainly exposed to the east, south-east and south. Their speciality is the terroir. Slate, as in the German terraces and the Lower Mosel, is not present. In the northern area of the Luxembourg Moselle (canton of Grevenmachers) the Muschelkalk predominates, in the south (Canton Remich) there are Keuper and clay marl soils. Unspectacular steep slopes, but rather gentle hills. The vast majority of the slopes have a gradient of 15 to 30 percent, less than a third are really steep or terraced. The Moselle valley is wide open here and forms the so-called "Haff Remich" from Schengen to Remich.The so-called "Remich Lagoon", which has a unique fauna and flora.

Types of wine from the Moselle inLuxembourg

The dominant type of wine is the dry white wine. In general, Luxembourg wines are made from a single variety of grape. The variety spectrum differs from that of the neighbouring German region, where Riesling reigns supreme. In Luxembourg, Rivaner (Müller-Thurgau) has the largest area share with 28.5 percent. However, the Burgundy varieties Auxerrois, Pinot Blanc and Blanc and Pinot Gris together account for 39.5 per cent of the total vineyard area. The second most common grape variety is Auxerrois, followed by Pinot Gris and Riesling. Chardonnay has also become native to Luxembourg but only since the 1990s. For quality wines, these varieties are of considerably greater importance than Rivaner, whose area share has steadily declined in recent years. In contrast, the areas of the Burgundy varieties mentioned have quadrupled since 1966. Riesling accounts for 12.3 per cent of the vineyard area (159 hectares), significantly more than Elbling (116 hectares). Pinot Noir has been increasingly cultivated for several decades.

The Southern Wine Moselle stretches from the junction of the Sarre and Moselle rivers to the western border with France. On German territory, the Upper Moselle starts west of the mouth of the Sarre, on the south bank at Wasserliesch and on the north bank at Igel. The area of this sector is 746 hectares. Like the entire Moselle, this area is subject to constant change. Here, too, there are more and more winegrowers who are producing wines that are increasingly quality-oriented.

Mosel wine is generally associated with Riesling wines grown on schist soils, either on the Moselle, the Sarre or the Ruwer. On the other hand, in the Upper Moselle and Moseltor, the soils are composed of shell limestone. In addition to the classic Elbling, many Burgundian grape varieties are grown here. The sparkling wines of this region are famous because the soils are similar to those of the Champagne region.

Gateway to the Moselle

The German towns of Perl, Sehndorf and Nennig together form the Moseltor. With just 125 hectares, six vineyards and three villages, this area is the smallest in the Moselle. Unlike the rest of the Moselle, the Moseltor is not in Rhineland-Palatinate, but in the neighbouring Sarre. Even many Saarlanders do not know that there is a part of the Moselle and therefore a wine region in this Land.

In the Upper Moselle, too, vines were already being cultivated in Roman times. Today, around 700 hectares are planted with vines. Of which 450 hectares are Elbling. This vine, known in Latin as "uva alba", was probably introduced into the Moselle by the Romans.

However, as the national and international trend is clearly towards well-known French grape varieties or Riesling, the cultivation of Elbling in the Upper Moselle has halved over the last 20 years. During the same period, the area under Auxerrois has increased almost tenfold. The area under Chardonnay, on the other hand, has increased fourteenfold. Although the pace has slowed down, this development will continue.

In addition to the above-mentioned varieties, there are vineyards of white varieties such as Rivaner, Ruländer, Bourgogne blanc, Auxerrois or Chardonnay. The main red wine varieties are Pinot Noir and Dornfelder. It is precisely the areas of white Burgundy, Ruländer, Auxerrois and Spätburgunder that have increased.

Wines of the Upper Moselle

These soils give the wines a special profile. Floral notes are the most prominent. Fruity notes such as apple, quince or tropical fruit are more discreet. In addition to the herbaceous notes, one can also taste vegetable notes such as kohlrabi. The region is particularly well known for its sparkling wines. The crémants stand out in particular. The best crémants can certainly compete with good champagnes. 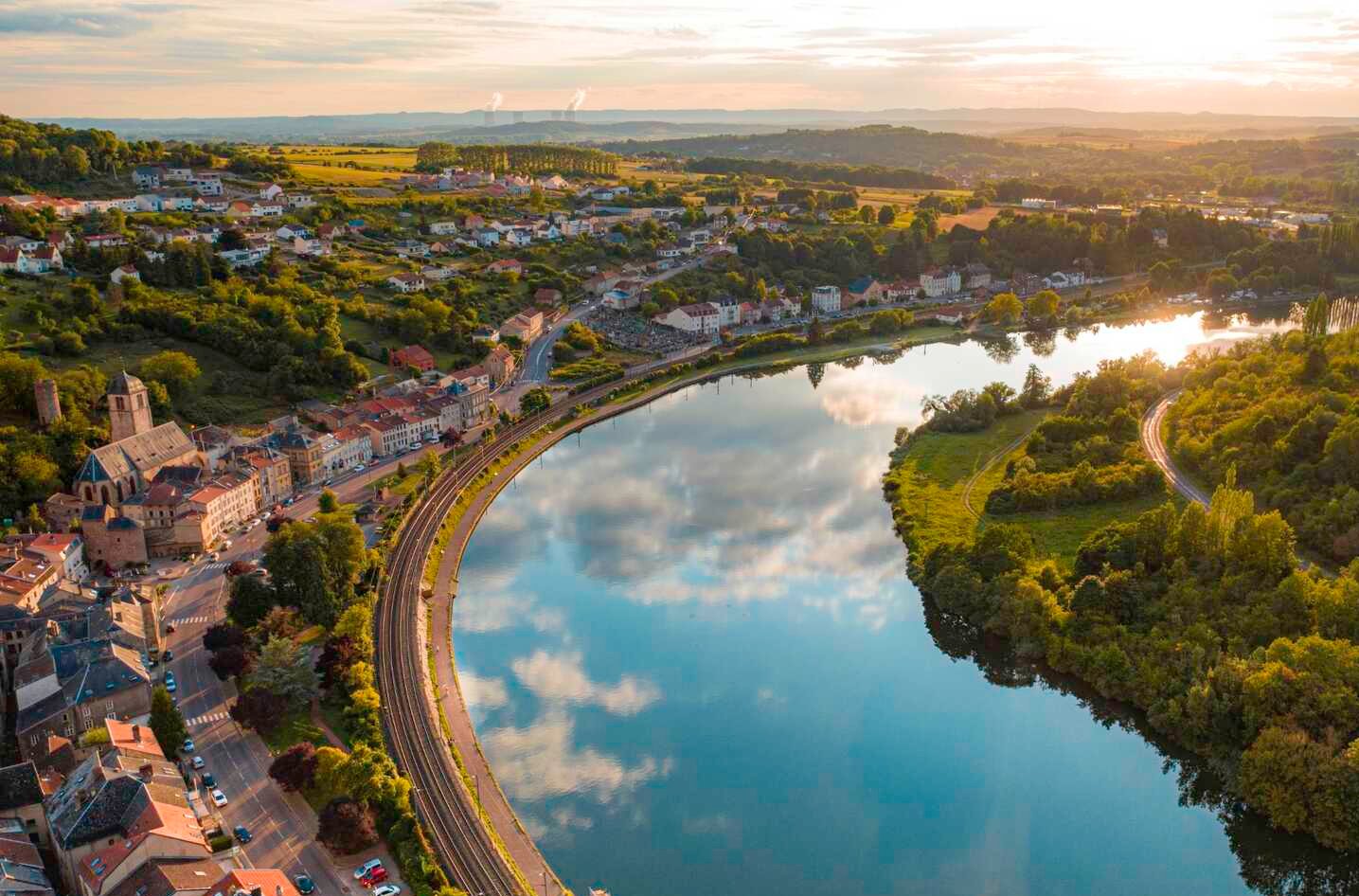 The vineyards, planted at an altitude of less than 250 metres, occupy hillsides that stretch along the course of the Moselle and its tributary, the Seille, around three main sectors, distributed from north to south as follows:

The Auxerrois grape variety is not a variety from the Auxerre region, but an authentic original variety, created in Moselle at the Laquenexy wine centre. About Müller-Thurgau: Created at the end of the 19th century in Switzerland by Professor Muller, who practised his art in Thurgau (Thurgau region in German-speaking Switzerland), this wine is the result of crossing two prestigious grape varieties, Riesling and Sylvaner.

The Luxembourg neighbours produce it with the same pleasure under the name Rivaner (abreviation of Riesling and Sylvaner). Müller-Thurgau is a grape variety that gives a particularly fruity wine, with a colour that seems to hesitate between yellow and green, and which should be drunk young!